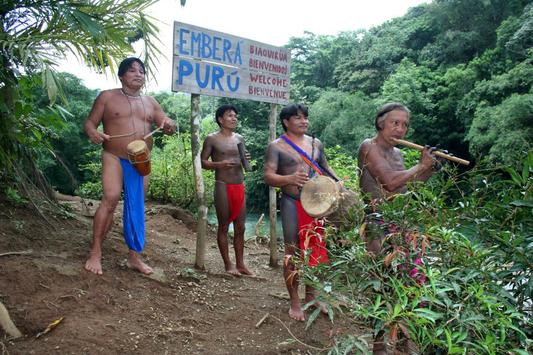 Hauling a newly made dugout canoe out of the jungle. 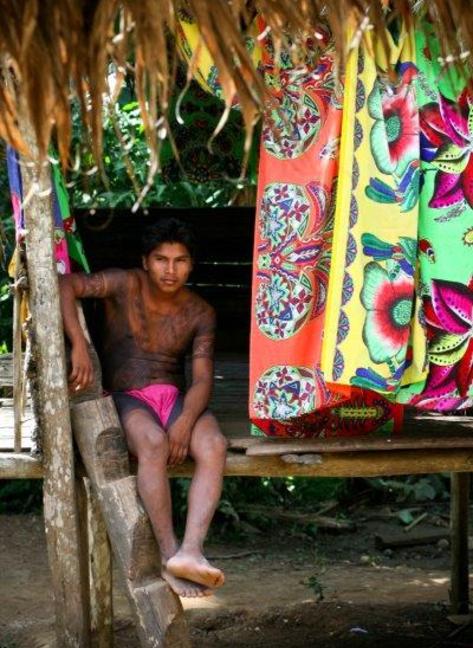 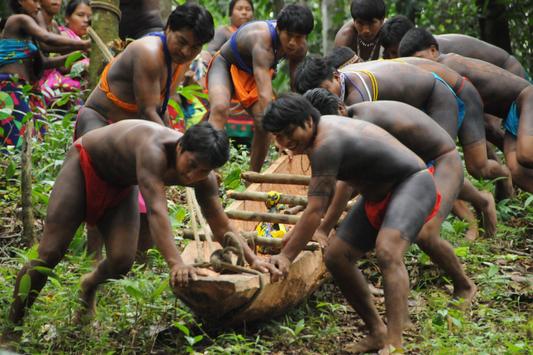 The Emberá tribe originates from the Darien region in Panamá and the Choco region of Colombia.  They have lived in this area for centuries, long before there were countries called Panamá and Colombia and before the first Spanish explorer set foot in the new world.  Nobody knows if the Emberá have always been in this region or migrated from elsewhere. There are rumors that they have ancestors in Brazil and that they possibly came originally from Polynesia.  The truth is we simply don't and may never know.

Most of the current population of Emberá in Panama, around 30,000 individuals still live in the Darien region.  The Darien is quite remote, 6-10 hours by car East of Panama city. It is so remote, that the PanAmerican highway that runs from the USA ends in the Darien at the Sambu river.  Past this point the only mode of travel is by foot or dugout canoe!

The Emberá that live in the Choco region of Colombia are also sometimes called the Choco or Chocoe Indians.  The term Choco actually refers to the Choco region and is used only by non-Emberá people.  The Emberá never use that name to refer to themselves.

The government of Panamá recognizes the 7 unique Indigenous tribes who live here and they each have been given what is called a Comarca.  A Comarca is roughly equivalent to a reservation in North America with several notable differences.  The tribes in Panamá were never forced off of their home territories, the comarca borders are drawn around their original homelands.  The other big difference is that in Panamá the indigenous people were never forced into boarding schools nor punished for speaking their language or practicing their cultural traditions.  In fact, the tribes were ignored and not even counted in the census of Panama and not recognized as citizens nor given the right and access to education until 1975!  There is one benefit that resulted from the Emberá being ignored for so long, and that is that their language, culture, traditions, villages and lifestyle are still intact.  Because they are still in touch with their traditional and cultural roots, allows them to offer so much of their culture and traditions on our tours.

Life in the Darien today, is not easy.  Even though there are plenty of natural resources for them, much of the area outside of their comarcas is a National Park, which means they are no longer allowed to hunt or grow subsistence crops as they always have.  Traditionally, the Emberá people would live in an extended family group along one of the many rivers.  To access a school for their children, many families now have to relocate closer to a more populated area.  This means leaving the rain forest and river behind and relying on money and stores to provide your food with little opportunity to earn an income to support your family.

The people of the village of Emberá Purú migrated from the Darien about 50 years ago, seeking a better quality of life for themselves and their children.  They settled in what is now the Chagres National Park and are within 1-2 hours from a city with modern medicine, supplies and secondary education for the children.  They survive by the income generated through tourism to their village.  Tourism is a fun way for them to earn an income to purchase basic staple food items, medicine, school supplies, gas and outboard motors.  Tourism also encourages the Emberá people to maintain their traditions, culture and language and allows them to live as they prefer to live and to share it all with visitors from around the world.  Tourism also instills a sense of pride among the Emberá people because instead of being ignored, they feel proud that people like you have come from all over the world to meet and learn about them and their culture. 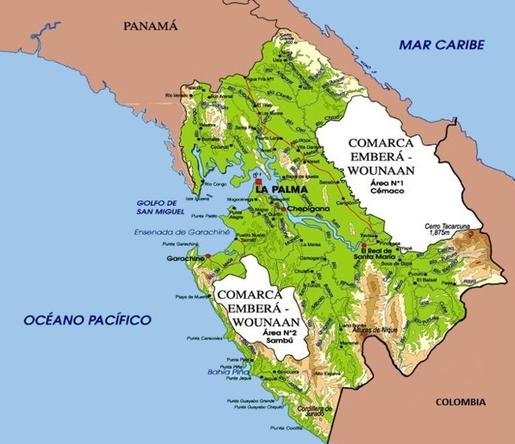